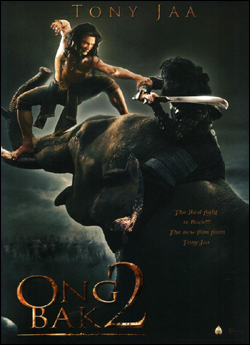 When compared to the first “Ong Bak” movie, this 2008 sequel is pretty much a failure.

Released in 2003 and by far one of the best and most intriguing martial arts movie ever made, “Ong Bak” is essential in every aspect for the action cinema lover. It is brutal and realistic in a very simple and objective way. It is fun to watch and you want more and more after every action scene.

“Ong Bak 2” for instance fails to almost every single aspect of its predecessor. And it is not a sequel nor a prequel as the trailer might suggest. But make no mistake. You are still getting astonishing fights and superior choreography. And some interesting characters as well.

When the movie ends, however, you’ll surely have the impression that “Ong Bak 2” was made with only one purpose in mind: to prove that Tony Jaa is the perfect human weapon. That’s all about “Ong Bak 2.”

In some ways “Ong Bak 2” feels like a fantasy Korean movie made for TV. And no matter if you like those Korean fantasy movies, it is not a good thing if you’ve watched the first “Ong Bak” and “Tom yum goong” (2005), released in the US as “The Protector” and in the UK as “Warrior King.”

“Ong Bak 2” is directed by Tony Jaa himself. He may be the perfect human weapon and may act without using wires or CGI. But Jaa is far from maturity as an actor, what to say as a director?

Jaa is also responsible for the great action choreography in “Ong Bak 2” and he makes sure everyone notices he can perform in various styles of martial arts, from Chinese Wushu to Brazilian Jiu-Jitsu.

“Ong Bak 2” also becomes oddly artificial if you notice that Jaa’s character is practically the only one who fights without a mask or a heavy make-up. The super ninjas look great and scary — especially the one with a basket on his head — but who are they and from where do they come from? There’s not a single and humble explanation for so many things.

Tony Jaa does not need Hollywood or a heavy load of money in order to be in good movies. “Ong Bak 2” clearly has a very good (and definitely not cheap) production. What he needs is a good director. To make him stop screaming for anything on screen, for example. And avoid having the Steven Seagal syndrome, meaning: having the exact same facial expression for the entire movie and all his movies.

Perhaps “Ong Bak 2” is to Tony Jaa what “Zhong hua ying xiong” is to Jet Li. Released in 1986 as “Born to Defense” (or Born to Defend) in the US and “Chinese Hero” in Hong Kong, it was directed by Jet Li himself — who publicly admit it was a very bad decision to direct that movie being so inexperienced behind (and in front of) the cameras.