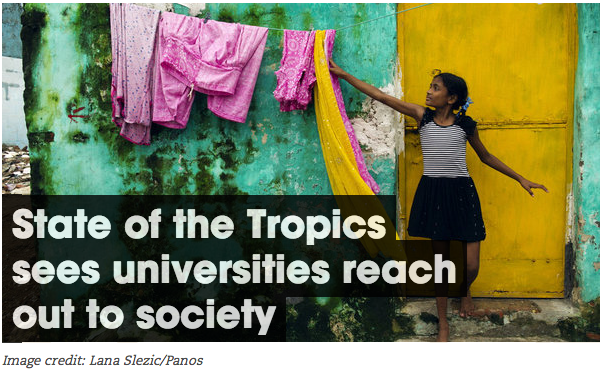 Twelve universities and research institutions from around the world have joined forces to assess the critical issues facing the world’s tropical regions and to examine how investments in aid, research and education affect development there.

The institutions say they “share a responsibility to work with and for the people of the tropics, to bring to bear the power of our understanding, science and innovation on the issues of the tropics to create a brighter future for the tropics and its peoples”.

Participating universities include Ecuador’s university Escuela Superior Politécnica del Litoral, the University of Nairobi in Kenya, and the University of Papua New Guinea. The group says it will produce a major report every five years, and a paper focusing on a key tropical issue every year.

They released their first State of the Tropics report in Myanmar last month (29 June) to address a broad question: is life in the tropics getting better?

“The report demonstrates that nations in the tropics have made extraordinary progress across a wide range of environmental, social and economic indicators in recent decades,” says Sandra Harding, vice chancellor of James Cook University in Australia and convenor of the group.

This year’s 500-page report draws on a wide range of data as well as the diverse backgrounds, expertise and knowledge of leading research institutions across the region and beyond.

It highlights the significant and unique challenges that tropical regions face, providing an in-depth analysis of these challenges. The assessment ranges from atmosphere and biodiversity, to poverty and urbanisation, governance and health, and science and technology.

The population in the tropics is expected to exceed that of the rest of the world by the late 2030s, it says.

“Because most of the world’s children will live in the tropics by 2050, we must rethink the world’s priorities on aid, development, research and education,” says Harding.

Adalberto Luis Val, director of the National Institute of Amazonian Research in Manaus, Brazil, says the group will be sharing the results with governments and other research institutions.

Science in the tropics

The section on science and technology shows mixed progress in the tropics, with rapid growth in the number of published scientific and technical papers, and enrolments in tertiary education — while investment in research has increased modestly.

Despite these improvements these three indicators compare poorly with the rest of the world. The report urges that investing in technology and innovation will be important for tropical areas to compete in future knowledge-based economies.

It also highlights the need for locally-relevant research as advances are not always transferable to the tropics. For instance, it says that advances made in corn production in the United States have little direct relevance for a cassava farmer in the South Pacific island of Vanuatu.

For maximum impact, research spending should facilitate the adoption of science and technology, but also invest in locally-relevant innovations and solutions for the tropics, it adds.

The report also calls for journals published in local languages to be included in international journal databases.

“Small, low impact, local journals published in local languages are unlikely to be included in worldwide databases,” according to the report. “Conversely, it is these journals that are likely to publish work most relevant to the tropics, addressing local issues.”

Currently international databases are dominated by research from Europe and North America, much of which has little relevance to the Tropics, it adds.

Luis Val says the report is a great contribution to scientific information in the region that may help governments tailor policies to local needs.

“In most tropical countries we still lag behind when it comes to scientific information and the proper usage of key scientific data to lead regional policies,” he says.

“The Amazon, for example, has already shown us several times that we shouldn’t import foreign models and adapt foreign technologies because in most cases it’s not viable to do that at all. Instead, we should develop science and technology to meet our regional needs.”

> Link to State of the Tropics report